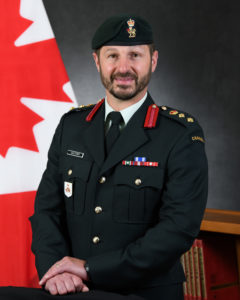 Col Etienne Gauthier enrolled in the Canadian Armed Forces in 1998 as an Officer of the Royal Canadian Electrical and Mechanical Engineering (RCEME). He completed his bachelor’s degree in physical science and has a master’s degree in defense studies from the Royal Military College of Canada.

Col Gauthier commanded at the tactical level in the General Support Battalion Field Workshop, the 1st Battalion Royal 22e Régiment as a maintenance officer and the 5 Service Battalion as the commander of the maintenance company. During those years, he participated in three build-ups in support of 5th Canadian Mechanized Brigade Group with national support elements 4-06, 3-10 and 4-12.

Col Gauthier deployed to Afghanistan on Operation ATHENA Rotation 10 as the Senior Logistics Operations Officer (SLOO). He received the Meritorious Service Medal for his work in theater of operations.

Col Gauthier is married to Emilie Poliquin and they are the proud parents of three children: Megan, Jeremy and Gabriel. They share interests in camping, soccer, hockey and dancing. Their values are family-oriented