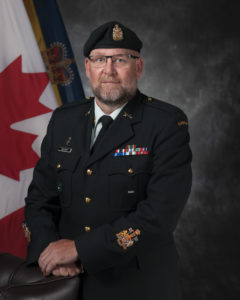 CWO Northorp enrolled in the Canadian Forces (CF) as a Vehicle Technician in March 1990 in Sudbury, Ontario.  He completed his recruit training at Canadian Forces Base (CFB) Cornwallis, Nova Scotia and attended his trades training QL3 at CFB St-Jean, Quebec.

Upon completion, he was posted to CFB Valcartier, 5 Service Battalion, Administration Company.  After 36 months On the Job Training (OJT) Pte Northorp completed his Advanced Trades training QL5 at Canadian Forces School of Electrical Mechanical Engineers (CFSEME), CFB Borden in 1994. Following course, he was posted to 3rd Battalion, Royal 22nd Regiment where he was groomed as a soldier, leader and technician.

Posted to CFSEME, he spent 3 years in the field trg QL3,QL5,QL6 & PH III officers. Upon promotion to the rank of Warrant Officer in 2006 he was appointed as the Pl WO for OSQ’s, Special Projects, Leopard training, and Recovery training. After a total of 5 years at CFSEME, he was posted to Maintenance Techniques Detachment, Ottawa as a Technical Assessor.  He was promoted to Master Warrant Officer in June 2010 and was employed at Canadian Operational Support Command (CANOSCOM) Headquarters in Ottawa as the Land Equipment Maintenance Systems (LEMS) subject matter expert for all deployed major equipment and weapon systems.

In 2012, MWO Northorp deployed to Kuwait as the Camp Sergeant Major of the Operation Support Detachment, Roto 0. Upon return from Kuwait, he was fully immersed in the TRANSFORMATION from CANOSCOM to Canadian Joint Operations Command (CJOC) assuming the same responsibilities to include a dimension of domestic ops. That July, he was posted to Director General Land Equipment Program Management (DGLEPM) and more specifically to the Directorate of Support Vehicle Program Management (DSVPM) as the Life Cycle Maintenance Manager (LCMM) and Technical Authority (TA) of the Canadian Army’s fleet of Armoured Heavy Support Vehicle System (AHSVS) and Armoured Troop Carrying Pods.