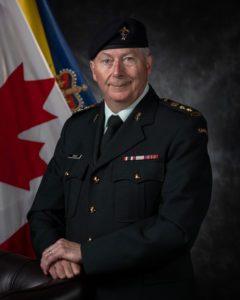 Col( Ret’d) Tom Temple was born in Powell River, BC on 12 August 1959. After secondary school, he rushed off to Royal Military College Saint-Jean, then Royal Military College of Canada where he graduated in 1981 with a Bachelor of Mechanical Engineering Degree. Following his officer training he was posted to a series of command appointments: initially 4 Service Battalion in Lahr Germany in 1982 where he was the platoon commander for Headquarters, and then Vehicle and Recovery Platoon; and subsequently 3rd Battalion Princess Patricia’s Canadian Light Infantry in Victoria, BC as the Maintenance Officer.

In 1985 Col(Ret’d) Temple was posted to the Canadian Forces School of Electrical and Mechanical Engineers, Regimental Company, initially as an instructor for officer training and then as the Training Officer.  Near the end of his tour in 1987, he completed the Land Forces Command and Staff Course, was promoted to Major, and was posted to Bordon, England to the School of Electrical and Mechanical Engineering to add a Canadian flavour to British training. The posting prompted his marriage to his lovely wife of more than 30 years, Marie Claude Lussier. In 1993, Col Temple was posted to Manitoba Lakehead District Headquarters as the G4, and then in 1996, to 1 Area Support Group in Edmonton as the Officer Commanding of the Workshop. At the end of this command tour, he attended Command and Staff College, was promoted to Lieutenant Colonel, then inevitable posted to the Director General Land Engineering Program Management Division (DGLEPM) in Ottawa in 1999. This included a couple months in the Light Armoured Vehicle III project, after which he became the Project Manager for the Light Utility Vehicle –Wheeled project.

In 2002 Col (Ret’d) Temple was appointed as Commanding Officer 3 Area Support Group Technical Services Branch in Gagetown, NB, during which time he attended the Advance Military Studies Course.  In December 2004, he was posted back to Ottawa as the Resource Manager for the Deputy Chief of Defence Staff. In 2005, Col (Retd) Temple was promoted to Colonel, and appointed Commandant 202 Workshop Depot in Montreal QC.  In late 2007, he returned to DGLEPM as the Director of Armoured Vehicle Program Management, and subsequently as the Chief of Staff/Director Land Engineering Support. He retired from the CF in January 2011.

Col (Retd) Temple enjoyed a memorable career that included command tours at every level, and tours to Ottawa during the Afghanistan War that focused on critical national support for our troops on the ground. Col (Retd) Temple has enjoyed his retirement but has always remained active with the Corps. He was a valued member of the teams that built the RCEME Museum in Kingston and the RCEME Foundation, and has been active as a member of the RCEME Guild Board of Directors. Col (Retd) Temple was appointed as Colonel Commandant of The Corps of RCEME on 16 July 2021.

Col (Retd) Temple and his wife Marie Claude reside in Ottawa. They have two gracious daughters, Catherine and Camille, and they have adopted more dogs and cats than he cares to count.