During the winter of 1943, 1 Infantry Troops Workshop was on the Italian Adriatic coast near Lanciano. One particular villa in the area had been completely reduced to rubble, yet in the middle of it all and almost totally untouched was the statue of a peasant girl.

She was quite attractive, but standing there amongst the rubble she must have looked even more beautiful to the war-weary and glamour starved technicians of RCEME. She was coerced into returning to the unit lines, where she was soon kitted-out with her own helmet, old rifle and bayonet. She became affectionately known as Sadie. She helped our troops by volunteering to stand guard at the entrance to the workshop control office. Every time the workshop moved, so did Sadie.

At the war’s end, she found herself in Arnhem (having travelled by ship from Italy to the south of France, then by truck through France, Belgium and Holland). After all of her dedication and devotion to duty (and our troops), her loyal comrades were not about to desert her. She was rewarded with a posting to paradise at the RCEME school in Barriefield. Eventually she was posted to RCEME School in Borden where she stands guard to this day. 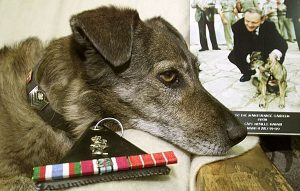 Digger, the Maintenance Platoon Mascot, has been with the Canadian Contingent of the Logistics Battalion (LOGBATT) for over 26 tours of peacekeeping duty at Camp Ziouani, Golan Heights.

Digger had a turbulent career, and was demoted a few times until he settled down and was finally promoted to Warrant Officer in 2003 prior to his transfer to Canada.

Digger was not only revered and popular with the troops, whose morale he boosted during their Tour, he even had his picture taken with Canadian Prime Minister Jean Chretien during the PM’s visit to the camp in April 2000.